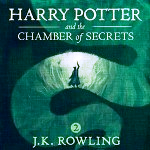 Harry Potter And The Chamber Of Secrets Audiobook – Jim Dale

Harry Potter’s summer has included the worst birthday ever, doomy warnings from a house-elf called Dobby, and rescue from the Dursleys by his friend Ron Weasley in a magical flying car! Back at Hogwarts School of Witchcraft and Wizardry for his second year, Harry hears strange whispers echo through empty corridors – and then the attacks start. Students are found as though turned to stone…. Dobby’s sinister predictions seem to be coming true.

Listen Harry Potter and The Chamber Of Secrets Audiobook

Harry Potter is a famous fantasy series authored by J.K. Rowling. The series follows a young boy named Harry Potter as he fights to relinquish evil wizards such as Voldemort and gains relationships along the way. Here is a plot summary of the second book.

The Beginning Of The Book

This book starts out with the protagonist of the story, Harry Potter, at his adoptive family’s house. The Dursleys are Harry’s only remaining family since his mom and dad where killed by Voldemort when he was a baby. Harry is forced to spend his summers there because of this.

While his Aunt and Uncle Dursley are hosting a dinner party, an elf named Dobby shows up. He is quick to warn Harry of Danger if he decides to return to Hogwarts. This is the magic school of wizards Harry attends with his friends. Harry refuses to head Dobbys warning. As a result, the house-elf makes a mess in the Kitchen. This upsets the Dursleys so they lock Harry in the Cupboard they force him to sleep in all summer.

Later, Harry’s friend rescues him with a flying car. This is when the reader is reintroduced to Ron Weasley, Harry’s best friend from the first novel. After he is rescued, he stays with the Weasleys. They go shopping for school supplies. While shopping, he has an encounter with the new defense against the dark arts teacher, Mr. Lockhart.

Harry’s Trouble Getting To Hogwarts

Harry cannot get through the train platform as he tries to return to Hogwarts. Because of this, Ron and Harry have to take the flying car which they flew horribly. The ended up crashing the car into the Whomping Willow, and are then detained.

During the night of Halloween, the caretaker’s cat is petrified. A threatening message is written over it. Harry hears a strange voice while this is going on. He, Ron and Hermione do some research on the strange events that occurred. They then discover that Hogwarts has a chamber of secrets and that that last time it was opened, fifty years ago, a student was killed.

Harry Terrifies his fellow students by speaking in parseltongue while trying to charm a snake. Only the air of Slytherin should be able to do this. Hermione and a girl from Ravenclaw are petrified later in the book. Hagrid and Dumbledore are blamed and removed from the school.

A teacher discloses to Harry that Ginny Weasley, Ron’s younger sister, has been taken to the chamber of secrets. Harry goes into the chamber to meet Tom Riddle, the air of Slytherin. Tom Riddle turns out to be a young lord Voldemort. Tom then summons a Basilisk to destroy Harry. Harry destroys the snake with the sword of Griffendor, brought to him by Dumbledore’s Phoenix. He then stabs Tom Riddles Diary, which destroys him.

Harry is able to help Ginny. He then explains his adventure to Dumbledore. Harry is also able to free Dobby by forcing his master to present him with clothing. Everything is back to normal at Hogwarts, so Harry leaves.

For A More Detailed Telling Of The Story…

If you’d like to hear more about Harry Potter’s adventure, buy the book. It’s available wherever books are sold and can be purchased online at Amazon.