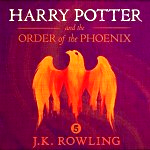 Publisher’s Summary: Dark times have come to Hogwarts. After the Dementors’ attack on his cousin Dudley, Harry Potter knows that Voldemort will stop at nothing to find him. There are many who deny the Dark Lord’s return, but Harry is not alone: a secret order gathers at Grimmauld Place to fight against the Dark forces. Harry must allow Professor Snape to teach him how to protect himself from Voldemort’s savage assaults on his mind. But they are growing stronger by the day and Harry is running out of time….

Listen Harry Potter Book and The Order of the Phoenix Audiobook

The fifth installment in the Harry Potter series gets right down the business with a dementor attack on Privet drive forcing Harry to defend both his cousin and himself. Upon finding out that he is in danger a mysterious group of his friends which him away to Grimmauld place and tell him about a secretive fighting force known as the Order of the Phoenix, a group started By Albus Dumbledore to fight Voldemort and his forces of darkness.

Harry finds out that his use of underage magic has earned him a summon to go before the Wizengot and that he may lose his wand and ability to go to school as well. Thankfully Dumbledore is there to ensure that Harry is cleared of all charges and returns him to headquarters with an all clear from the law. Harry helps the other two members of the Golden Trio clean out the house before they head back to school.

Upon arriving at the school Harry finds that Ms. Umbridge, a member of the Wizengot, will be the new Defense teacher. Ms. Umbridge seems to hate all of the Hogwarts staff and begins evaluations on them as well as a series of demented punishments that she foists upon the students. While dealing with her denial of the Dark Lord’s return and her subsequent hatred of him, Harry much also deal with visions from Voldemort and crippling headaches.

As the year progresses Ms. Umbridge elects several Slytherins as her law keepers and increases the illegality of her punishment. At one point she takes over the school from Dumbledore after finding out about a group that Harry and his friends started. This leads to Dumbledore disappearing from Hogwarts and taking on larger roles as the leader on the Order of the Phoenix.

Towards the end of the year Harry begins to fear that his Godfather is in trouble and his fears are confirmed upon talking to his house elf. Risking his own personal safety he devises a plan to free Hogwarts from the grip of Ms. Umbridge and leads his friends on a mission to free his family member. The group must make their way into the city of London and find a way into the Ministry without attracting too much attention. Once inside they learn that they have been trapped and that they are being used for Harry’s relation to a prophecy kept in one of the departments.

A battle ensues with Hermione being severely wounded, Ron being attacked by a strange brain, and Harry being mentally crippled by the anger that Voldemort displays. When all seems lost the Order of the Phoenix arrives to save the day but Harry loses the only family member that he has ever loved. The battle is called a draw between the two forces and the heroes retreat to Hogwarts to heal, grieve, and plan their next strategy. Going home this year holds no joy and Harry learns that he stays with relatives for the protection that his mother fave him by sacrificing her very life.