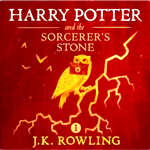 Harry Potter has never even heard of Hogwarts when the letters start dropping on the doormat at number four, Privet Drive. Addressed in green ink on yellowish parchment with a purple seal, they are swiftly confiscated by his grisly aunt and uncle. Then, on Harry’s eleventh birthday, a great beetle eyed giant of a man called Rubeus Hagrid bursts in with some astonishing news: Harry Potter is a wizard, and he has a place at Hogwarts School of Witchcraft and Wizardry. An incredible adventure is about to begin!

We first meet Harry at his aunt and uncles home on Privet Drive. He is a young babe being dropped off by a man with a strange device and a woman with a strange affinity for cats. We don’t see him again for 11 years when he begins to get letters addressed to him that terrify his guardians and anger them into running away from their very hope. However, they are pursued by a giant who tells Harry that is a wizard who is also the son of wizarding heroes who sacrificed their lives to save him.

This sets in motion Harry heading off to an amazing boarding school that is only open to witches and wizards. He discovers hidden shopping districts, train platforms, and even whole villages in many places within the UK. His first two months see him slowly making friends with a Mr. Ron Weasley and learning more about the school as whole. Then on Halloween the school is attacked by a troll and a Ms. Hermione Granger becomes a fast friend to the others.

This group known as the golden trio becomes an unstoppable group of friends who are sure there is something strange going on at their already strange school. Through all of this Harry makes his way onto a sports team, gets in a fight with someone from another house, finds that he dislikes many of his classes, and finds the wondrous appeal of magic.

Harry also begins to learn more about his origins and finds a mysterious mirror that shows him his family together. He finds himself addicted to this mirror and is heartbroken when the headmaster has it moved to another location. Around this time he begins to notice one of the teachers acting strange and comes across a huge three headed dog seemingly guarding something. Whispers around the school begin to gain his interest and together with the other three members of the Trio he becomes convinced it is up to him to save the school. Together the group circumvent a series of trials only to find that they were leading the forces of evil to a very important artifact. Only through quick thinking are they able to defeat the threat and escape with their lives and a few points lost. The teacher who they thought was guilty is proven to be innocent while one that they barely noticed has been harboring the soul of pure evil within him.

The school year ends with their first victory and the promise of many more to follow. The friends head back to the train to go home and resolve to spend more time together in the following years. Everything seems to be looking up for Harry as he heads home to his terrified guardians with a newfound knowledge of the magical world. The book leaves off in a place that instills happiness and a sense of hope within the reader as portions of the next book begin to be hinted towards.